Welcome to our B2B Online Shop >  Lead batteries  >  AGM batteries
Note: By activating embedded videos, data is transmitted to the respective provider. Further information can be found in our privacy policy.

The lead-fleece battery – also called AGM battery (Absorbent Glass Mat) – is a sealed, valve-regulated battery. Thanks to the built-in glass fibre fleece, the AGM battery is secured against leakage of the electrolyte (acid), when used in all positions. For the backup and security sector and for many other applications, we offer you the AGM battery between 2 V and 12 V and 0.8 Ah to 200 Ah - partly with VdS recognition as a VdS battery - from various manufacturers. Try our own brands SSB Battery and SUN Battery, which stand for the highest level of quality at a fair price.

What is an AGM battery / AGM accumulator?

An AGM battery or accumulator is a vehicle starter battery designed to do two things: provide powerful starting surges and keep the vehicle's electronics running for a long time.

And the decisive advantage: they usually last longer than conventional flooded variants.

The acronym stands for Absorbent Glass Mat, and this is one of the many improvements made to Planté's original train battery. The glass mats that cushion the ultra-thin lead plates compress like a sponge. In return, manufacturers can squeeze more glass mats and lead into a battery. More lead also means more power. Moreover, this squeeze factor means that the inside of the battery is tightly packed.

These also have valves that regulate the amount of hydrogen and oxygen allowed to escape during charging. They belong to a broader category of valve-regulated lead-acid (VRLA) batteries that are typically used to store a large amount of energy over a long period of time or for continuous operation.

AGM batteries were developed in the late 1970s and served mainly as a emergency power supply for telephone booths and early computer rooms. Over the decades, their use expanded to motorbikes, the military, aircraft, submarines and power banks for offices.

Now they are also appearing in everyday cars and trucks. And why? What is the big difference between AGM batteries and conventional flood batteries?

The battery's superpowers are based on two novel additions to Planté's invention and a series of small design changes that fundamentally expand the capabilities of car batteries.

First, a valve prevents evaporated water from leaving the battery case. This may not sound like much more than the reverse of the one-way valves on coffee bean bags.

But this little trick is the secret of the long life of an AGM battery.

The basic chemistry is still based on lead, sulphuric acid and water. When you draw current, the acid molecules migrate to the lead plates, leaving behind water and lead sulphate. You remove the sulphuric acid from the solution to allow a chemical reaction between the paste on the plates. When the battery is charged, this process is reversed.

However, there is always the possibility that some water loss will occur as electricity splits H2O into hydrogen and oxygen gases. The loss of these water molecules means that the electrolyte remains more acidic than usual - reducing the potential strength of the chemical reaction on the plates and ultimately shortening the lifetime.

The AGM valve prevents these gases from escaping.

Unless you overcharge the battery. If you use the wrong charger for it, the current has to flow through everything it can. This means that more water molecules are broken up and too much gas accumulates inside. Then the safety mechanism kicks in, releasing some gas to relieve the pressure built up inside the battery.

Secondly, mats made of glass fibre mesh. They are the GM in AGM batteries (Absorbent Glass Mat).

Ultra-thin glass fibres soak up all the electrolyte (water and sulphuric acid) in thin cushions that pad the lead plates. Instead of the free-flowing liquid inside a normal car battery, the AGM battery carries its charge in soaked sponges that cover the lead plates. The complete coverage by the glass mats makes it easier to get more power out of the starter battery - and makes recharging easier.

In terms of performance, speed, longevity and durability, the AGM battery is superior to standard batteries. 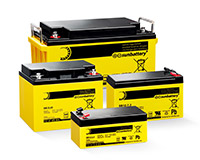 What is an AGM battery: The optimal battery for your start-stop vehicle

The lead-acid battery / accumulator has not changed much in 160 years.

Since its invention in 1859, the same 160-year-old technology has made your car and almost every car in the world run, with minor changes here and there. It is still thin lead plates, sulphuric acid and water (plus a durable polypropylene casing). Small improvements and adjustments have been made over the years. 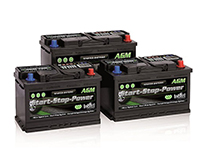 What is the difference between an AGM battery and a normal car battery?

They also recharge faster than conventional batteries. When the engine is started, they are only slightly discharged before the alternator takes over. Afterwards, the alternator recharges it - and ensures that all electrical components in the car function.

Due to their absorbed mats, AGMs withstand shock and vibration better than conventional batteries. They are also considered leak-proof, which means regulations are more relaxed for air or road transport.

This may sound like marketing hype. Instead, it is pure science.


Where or how are AGM batteries used?

These are often found in off-grid power systems, including environmentally friendly renewable energy systems such as wind and solar power. They are also ideal for powering electric vehicles and uninterruptible power supply systems, as well as robotics and some ATVs and motorbikes. In addition, it is installed as a start-stop batterie in so-called start-stop vehicles. These have an automatic start-stop / start-stop function, which results in the vehicle's engine being switched off for environmental reasons when idling at traffic lights, so that the environment is protected accordingly. With "standard batteries", this constant switching on and off over a longer period of time can lead to damage and, in the worst case, to the complete failure of the vehicle.

We would be happy to advise you personally on AGM batteries. Please feel free to contact us/a>.