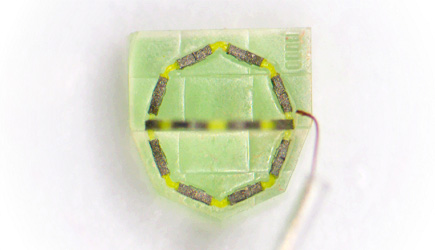 The system was developed by a team of Max Planck Institute scientists for Intelligent Systems (MPI-IS). It allows the individual manufacture of miniature robots based on a modular system. The individual components – also known as Voxel – can be used and combined with each other, much like a Lego set. The MPI-IS has already been applied to wireless robots for medical technology with magnetic control. The new system is the next step in the evolution of this technology.

Greater functionality thanks to new materials

Thanks to the new modular system, a range of different materials can now be used to manufacture these mini robots. For example, it allows a combination of components that stabilise the construction with magnetic components that control the soft machines, thus increasing functionality. The different combination possibilities of the magnetic parts also have the advantage that individual degrees of magnetisation are possible for the robots. In the end, each robot has its own individual profile.

The manufacture is still very elaborate, partly due to the small size of the Voxel (100 micrometres) and the manufacturing process of the individual parts, which is till done by hand. The team aims to automate the process in the long run in order to bring the robot to market.

The new modular system is certainly not the first robot designed by the Physical Intelligence Department. Their portfolio already includes robots that imitate animal creatures, for example, a spider-like model that can jump, robots resembling a caterpillar, and one with the ability to swim like a jellyfish, as well as robots with grasshopper-inspired legs.